In Memory Of Al 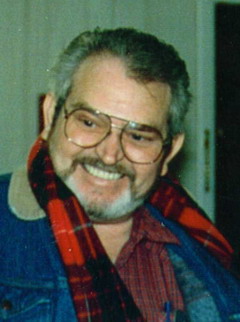 Alfred Henry Webb, born April 30, 1940 was the 5th child born to Bessie and Hugh Webb.  At this time he was the proud owner of two brothers and two sisters.  There were more to come at a later date but at this time he was just a little tyke and unbeknownst to others he was now "the" child of the Webb Family.

As a child he had a nickname of Helen, this was due to his long blonde hair.  I am not sure how old he was when he lost this nickname but I'm sure that it was a cross for him to bear as he was growing up.  Can you imagine going thru your childhood knowing that you were definitely male and yet being called "Helen"?  I'm sure this was a family name and that those outside of the family would never have called him that.  At least one can only hope that would be the case.  The picture below is of Al when he was a child somewhere around 11 years old I think.

Al was a very funloving type of person.  Between himself and the other brothers they could deal their sisters a lot of misery in the teasing that they dished out to us.  The lover of comics he could impersonate the sound that the character "Precious Pup" made when he was laughing.  He could talk like Donald Duck too and could tell jokes that would keep us rolling in laughter.  As I have said in my previous pages, our family is a musical one and Al could most definitely make music as well as sing.  As an adult he made a mandolin and could play it.  The songs that he would play could really bring the tears to your eyes.  A master of the guitar as well as his singing voice mixed with the other family members was a very happy time for us all.

Our family is a true loving family and Al was no exception.  We could cry just from hearing someone else in pain and despair, cry for the joy that others were experiencing as well.  Al was ready to lend a helping hand to anyone that needed it; family and friends, it made no difference who they were he was there for them if needed.

Life began for Al as a young boy on a farm where Mom and Dad lived near Friona.  He was blessed with the same attribute as Dad by being able to plow the straightest rows in a field as anyone could.  Al was around 15 or 16 when we moved to Bovina and as things were tight financially he decided it would be a good thing for him to "join" the Army.  He did but Mom had to sign for him to do that, we always said this was the only lie Mom ever told, the one about him being of age to join the military.  I know that after boot camp he had to go to Germany for a while.  I think that Bob and Tempey were in France at a portion of the time he was there and he got to visit them occasionally.  He then came back to Texas and then on to Lawton Oklahoma.  By this time he had married and settled down.

Life goes on and things sometimes don't work out the way we have planned.  As years went by Al found himself married to Betty Paul, she had a daughter by a previous marriage.  Gayla was adopted by Al and became one of ours as well she now is married with children of her own.  I'm not sure where she lives at this time, sadly enough I haven't stayed in touch with her.  Al once again  got a job for a farmer outside of Dimmitt and he and Beth and LeAnn moved.  Life had once again changed for him. He later  started driving a truck until his health demanded that he quit doing that sort of work.

Several years later, Al met Kathy Waller.  They married and combined both of their families into one and were very happy.  Later still they moved into town and bought a house there.  By this time Al had completely quit driving a truck due to his health.  Each day it was a blessing to us that he was still alive and breathing.  Things were hittting our family very close to home and with each time the phone rang we answered in almost in despair.

I can remember the year that Al, Kenzie and I ran the firecracker stand in Littlefield for the fourth of July.  No one worked any harder than Al did for he had a mission on his heart.  That mission was to earn enough money off of the sales to have a carport put up at their home for Kathy.  Well, he made that money and more to spare.  Kenzie and I were both paid for our labors as well and for me the money came into a very good use.  Al was also into wood working and he could build some of the most beautiful pieces imaginable.  I still carry in my handbag to this day a little cross that he made.  He told me it was no good and that their were lots of errors in it but for me it was beautiful, something he had made with his own hands.

To this day I can hear his voice on the phone saying, "Hi Baby Sister how are you today".  This is a wonderful memory for me and one I will cherish all of my life.  Another thing is that I can hear his voice singing all of the old family songs, religious ones as well.  I can see him in my minds eye singing "Knoxville Girl" and how he would swish his foot around as he sang I dragged her round and round.  We all got such a laugh over watching him sing that song but the tears rolled as he and Kathy would sing my all time favorite " I Ask For Mercy".  This song has never been published to my knowledge but they could sing it so good and my heart would almost stop over some of those words.

I have watched Beth and LeAnn singing, seen how they sometimes will tilt their heads over to the side, seen how their eyebrows would suddenly move in the same direction as their Dad's did when he was hitting a certain note.  Bitter sweet memory but a wonderful one too for they are his children.  My hope is that they will continue to sing in the same manner that their Dad taught them for they sound wonderful and have beautiful voices.

To be honest, I have never had my own closure over Al's death.  I know it couldn't have been prevented and it was his decision to do with his earthly shell as he wanted.  I just don't have that "certain" spot that I can go visit him and I suppose that is what I need.  The visions of him in life are still so fresh in my mind and heart, the pain of hearing his voice on tapes is almost more than I can bear at times but I know it is much better where he is now than what he suffered in his illness.

On November 23, 2002 Al went home to be with his Master.   He now resides once again with  Mother, Dad, and Anna Lee, and all other family members and friends that  predeceased him.  We have yet another spot that we as a family have to pull together, not to make it disappear but to help each of us to get through our sorrow and pain.  We do this by joining our hearts together, celebrating our family joys, sharing our sorrows, letting our laughter loose in the world.  Our family circle is not to be broken and I cherish each member of our family.

All of my brothers mean a lot to me, my sisters do as well.  The picture below is just of the brothers.  Handsome aren't they?  From left to right are: Wayne, Bob, Al, Sam and Larry.

I have never undertaken a job any harder as this one of doing "In Memory of......" one of our family members.  It is a soul searching one and in some areas I don't want to delve too far but I have to do this in order to give my heart some peace.  One more page is to be done and I hope that it will be the last for many years to come.

That heavenly choir has a wonderful voice joining in their song.  I can just hear it now in my heart!